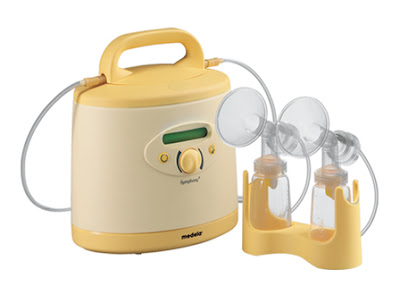 Mr. Crafty Nest recently heard on the radio that a dairy cow’s life span is decreased if it is pumped more than twice a day. I’m starting to think that this holds true for humans.

Some of you may know that I’ve been pumping…and pumping…and pumping since Logan was born. As much as I tried (and boy did I try), he just wouldn’t drink from the tap. So, my love/(mostly) hate relationship with my medela symphony began. I had to rent the symphony from my lactation consultant because the pump I was using before was eating my boobs (I’m not joking) and it would take foooorever to pump a measly ounce with it.

My pump contract was up yesterday. Before I knew it I was emailing my lactation consultant telling her to sign me up for another 3 months. Clearly I wasn’t thinking straight. Clearly my pump has magical powers over me and the emails I send.

I’m in the homestretch though. I will soon be chucking my pump out the window. Well, packing it up and sending it back to my lactation consultant. But I would rather throw it as hard as possible out the window…into moving traffic. Or burn it.

Here’s to another 3 months. The last 3 months.