You are here: Home / Uncategorized / disney / Movie Review: Disney Pixar’s Inside Out 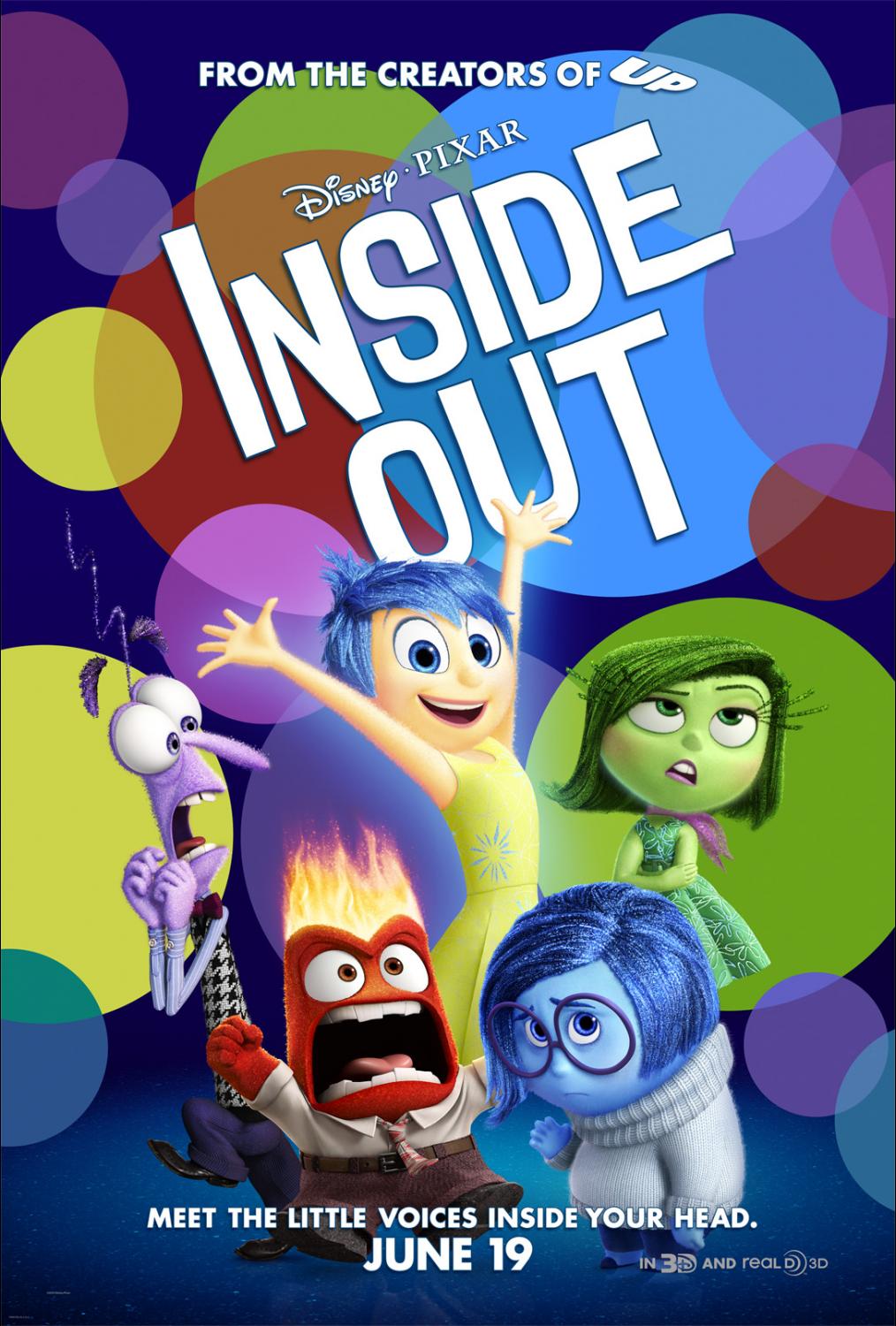 Have you seen Disney Pixar’s new original film Inside Out yet? It opened in theaters yesterday, June 19th. Director, Pete Doctor, found inspiration for this movie from his daughter. She was now a pre-teen, more quiet and withdrawn, which had him wondering what was happening inside of her head. He took us inside of the mind in Inside out to find out. My family had the opportunity to preview Inside Out at Disney Social Media Moms in May and I also attended an early screening last week with my almost 5 year old. We all loved it! 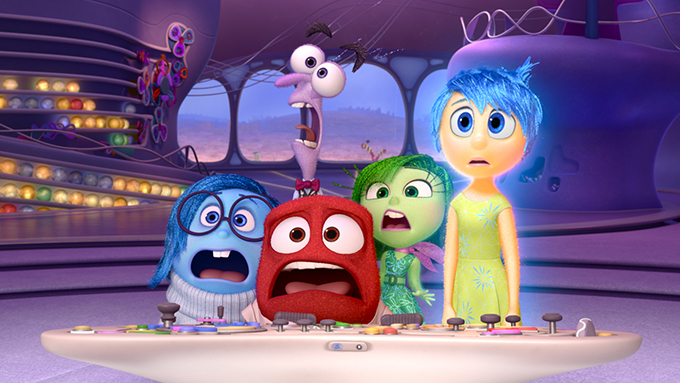 Do you ever look at someone and wonder what is going on inside their head? Disney•Pixar’s original new film “Inside Out” ventures inside the mind to find out.

Based in Headquarters, the control center inside 11-year-old Riley’s mind, five Emotions are hard at work, led by lighthearted optimist Joy (voice of Amy Poehler), whose mission is to make sure Riley stays happy. Fear (voice of Bill Hader) heads up safety, Anger (voice of Lewis Black) ensures all is fair and Disgust (voice of Mindy Kaling) prevents Riley from getting poisoned—both physically and socially. Sadness (voice of Phyllis Smith) isn’t exactly sure what her role is, and frankly, neither is anyone else.

When Riley’s family relocates to a scary new city, the Emotions are on the job, eager to help guide her through the difficult transition. But when Joy and Sadness are inadvertently swept into the far reaches of Riley’s mind—taking some of her core memories with them—Fear, Anger and Disgust are left reluctantly in charge. Joy and Sadness must venture through unfamiliar places—Long Term Memory, Imagination Land, Abstract Thought and Dream Productions—in a desperate effort to get back to Headquarters, and Riley.

Directed by Academy Award® winner Pete Docter (“Monsters, Inc.”, “Up”), produced by Jonas Rivera, p.g.a. (“Up”) and featuring an original score by Michael Giacchino (“The Incredibles,” “Ratatouille,” “Up”), Disney•Pixar’s “Inside Out” opens in theaters on June 19, 2015. 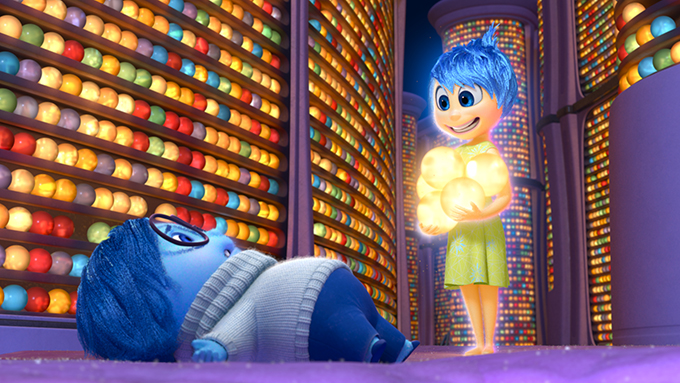 INSIDE OUT FUN FACTS 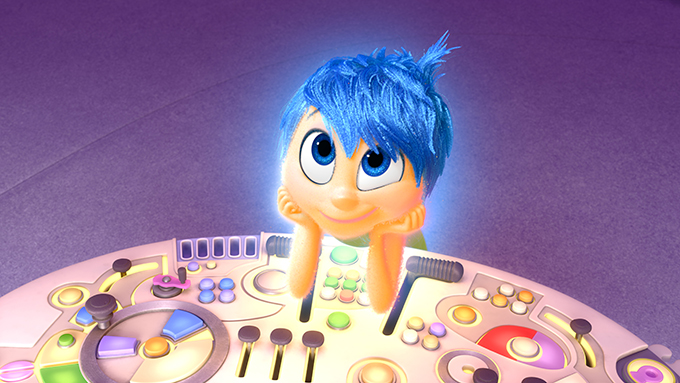 This movie ranks right up there with my all time favorite Disney movies. Maybe I loved it so much because I’m a former social worker who worked primarily with pre-teens and teenagers. Their emotions truly are all over the place and it’s a tough age, when they are wanting independence but still needing guidance. If you have a pre-teen in your life, whether you are a middle school teacher or parent, this movie is a must see for you. I think it can spark some great conversations. Even for younger children, like my almost 5 year old, it can help them to label their feelings.

Aside from my social work background, I think I loved this movie so much simply because I’m a mom. Without giving too much away, this movie reminded me that time is fleeting. My kids are growing up overnight. Cue the tears when Riley no longer needs certain memories, like her imaginary friend, in the movie. I want my kids’ “core memories”, the memories that they’ll never forget and that become part of who they are, to be filled with mostly joy. This movie also reminded me that the other emotions (fear, sadness, anger, disgust) also play an important role in the mind and they aren’t always a deficit. Those trials and challenges in life are how we get to joy. 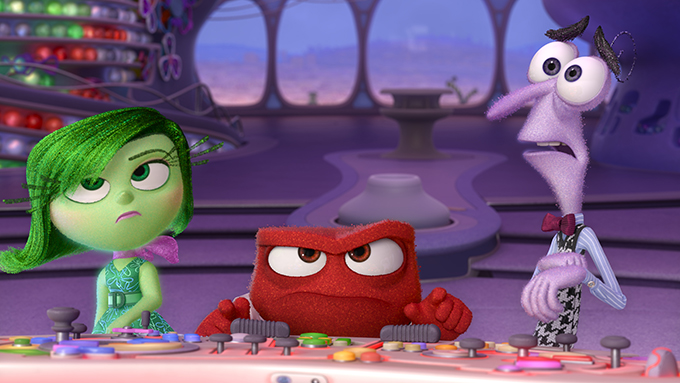 A lot of the deeper stuff in the movie will go right over a younger child’s head, but that didn’t stop my preschooler from enjoying the movie. He was glued to the screen and rarely ever wants to watch a movie more than once, but couldn’t wait to attend the early screening with me. His favorite character was Anger (Lewis Black) and Fear (Bill Hader), who gave us some comical relief. I loved Disgust (Mindy Kaling) and Sadness (Phyllis Smith), who’s voices were absolutely perfect for the characters. And of course, we all loved Joy (Amy Poehler).

We can’t wait to see this film again (and again). Keep your eyes peeled for LAVA, the animated musical short film, before Inside Out. It’s adorable and will also move you to tears. We can’t stop singing the LAVA song! 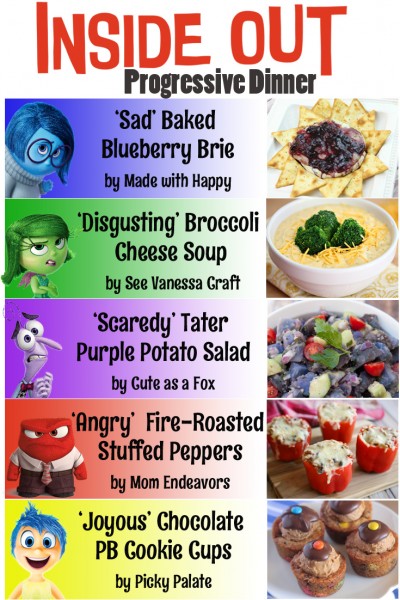 Inside Out Progressive Dinner 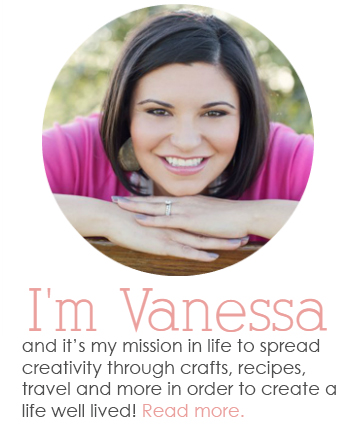 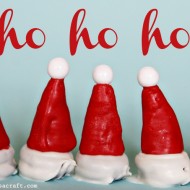 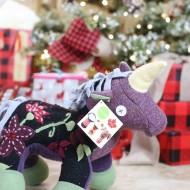 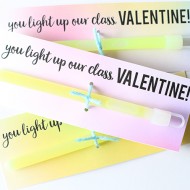 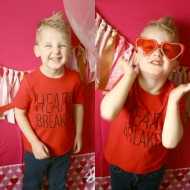 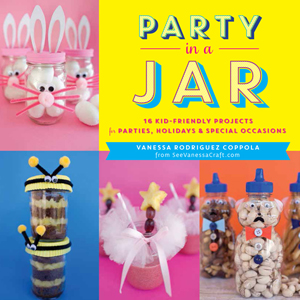